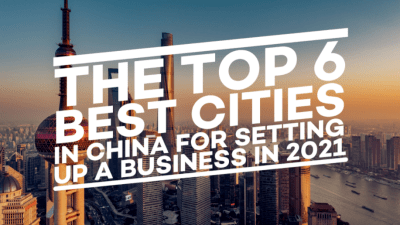 When it comes to establishing a base in China for your business, you should wisely consider and research the best city in China to conduct your operations from. There are a number of criteria to pay attention to when choosing the best Chinese city to set up a business: infrastructure, talent, international network, demographics, traffic + accessibility and parking, competition, proximity to other businesses, image, and business policies.

China classifies its cities into 3 tiers: T1, T2 and T3. Tier 1 cities are the most advanced in many of these criteria by a large and noticeable margin. It is no surprise that all the tier one cities are present on this list of the top 5 cities for business in China.

Hangzhou is the capital of Jiangsu, advantageously located 2 hours away(by rail) from Shanghai in the Yangtze River Delta. Hangzhou is best known for being the headquarters location of Alibaba and for West Lake. West lake is a huge lake surrounded by ancient temples and gardens, a UNESCO world heritage site, located in the middle of the city.

Hangzhou (along with Chengdu) is considered an “Emerging 1st tier city” with characteristics resembling that of a first tier city. The city attracts a lot of great domestic talents and is an IT and science research hub.

Chengdu is the capital of Sichuan province and the gateway to western China, also renowned for its panda sanctuaries. It is located in the center of China, 2 hour away from Chongqing, the only other mega-city in the region making this two-city hub the uncontested business center in western and Inner China.

Chengdu is an “emerging 1st tier city” and is the most advanced 2nd tier city in China. It benefits greatly from being an almost-tier 1 city in the emerging deep China regions of Sichuan and the surrounding provinces. Chengdu is the fastest (economically) growing city in China. In 2019 Bloomberg reported Chengdu had overtaken Shenzhen becoming the best performing city in China.

However, most of the fortune 500 companies in Beijing are state-owned and the city has a general reputation of having stricter policies in regards to foreigners and foreign business operations which is why we decided to rank Beijing last out of the 4 tier 1 cities on our list.

Also known as Canton, Guangzhou is over 2200 years old serving as the terminus of the ancient silk road. It is worth noting that the locals’s first language is Cantonese, although many speak Mandarin as a second language. The city is the capital of Guangdong province, the most populous and urbanized province in China. Guangzhou is home to a large number of foreigners from Africa, South East Asia, the Middle East and Eastern Europe.

The Canton Fair, the largest trade fair in the world, happens twice a year in Guangzhou. In 2019 the fair attracted 200,000 visitors and generated over $30 billion in trade. For this, Guangzhou is an ideal location for trading and commerce.

Shenzhen is located in Guangdong province in the Pearl River Delta, less than an hour away from Hong Kong. Shenzhen is China’s most hi-tech city, richest city (per capita income), and youngest city. The average Shenzhen resident is 28 years old. Deemed the hardware capital of the world, the area around Shenzhen produces 90% of the world’s electronics. Arguably the best location in the world to prototype and produce consumer electronics due to the abundance and proximity of custom-made and retail suppliers.

The city is a tech and financial hub, with some of the largest tech and banking companies in the world being headquartered there such as Tencent, Huawei, DJI, BYD, China Merchants Bank and Ping’An Bank. Shenzhen is the 4th city in the world with the most billionaires (after Beijing, Shanghai  and New York).

Before 1980, Shenzhen was a tiny village bordering Hong Kong. In 1980, the CPC designated the area as China’s first free trade zone and the influx of population and direct investment quickly followed. Because it is a new city, roads and infrastructures are modern and transportation is not a concern.

Shanghai always ranks among the best cities for business in China. It is the most populous city in China, has the largest and busiest metro system in the world and has the busiest container port in the world. Shanghai has long been a favorite in China among expats, it has the highest population of foreigners in China. It is an international hub where top talents from all over China and the rest of the world settle in to find work opportunities. In 2020, during the Covid 19 pandemic, large numbers of college educated Chinese who had studied and lived overseas, migrated (or moved back) to Shanghai, further adding to the talent pool.

Shanghai is advantageously located at the mouth of the Yangtze River Delta, halfway between the capital Beijing in the north and the pearl river delta (Guangzhou, Shenzhen and Hong Kong) in the south. The city’s location in combination with China’s expansive railway and multiple airports make it an ideal well-rounded place to travel to and from in China, East Asia and Southeast Asia.

June 22, 2022 No Comments
Read More »
PrevPrevious5 Things ALL Expats Should Know About China’s New Annual Tax Return
Next6 Reasons why 2021 is the Year you Need to do Business in ChinaNext