Rise of Greentech & EV in China

Hey guys, I hope you’ve gotten used to not having straws at Starbucks or Teslas being everywhere… because today we’re going  to talk about the eco-friendly market & EV in China and how it’s positioned to become a dominant industry and dominant lifestyle in the near future.

Of all the industries in China, the green-tech market may be the single most aggressively pushed industry by the CPC in the form of incentivized emission cuts both at the individual level and the corporate level. These policies have in the past few years drastically affected consumer and company behaviors. Today we’ll look at the incentives granted to green-tech consumers and businesses, the correlated behavior changes of consumers, and the future of sustainable products and EV in China.

The Chinese government’s aggressive policies to tackle CO2 emissions and commitment to hit carbon neutrality by 2060 are directly responsible for the boom in the green-tech sector in China. On September 13, 2021, the Chinese government stated there were too many new electric vehicle companies taking advantage of government subsidy loopholes and that it wold strive to consolidate the market. Industry and Information Technology Minister Xiao Yaqing also said on Monday that China would improve its charging network and develop EV sales in rural markets.

Before we dive into the meat of this topic it’s important to note that these economic incentives and lifestyle choices predominantly affect the rising middle class and upper-middle class. According to the latest McKinsey report, in the past decade, 80% of the consumption growth in Asia came from the rising consumer class, aka people entering the middle class. In the next decade, 80% of the consumption growth in Asia will come from the middle and upper-middle class as they further enrich themselves. In the same McKinsey report, 50% of surveyed consumers reported changing their purchasing habit out of concern for the environment. 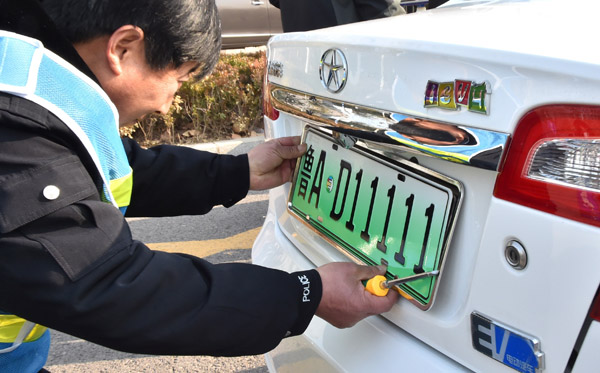 Automakers are also “iNcEntiVizeD”. Manufacturers are expected to produce an increasingly large percentage of electric vehicles per year or face penalties. The Chinese government announced a mandate in 2019 pushing manufacturers to create quality electric vehicles which can travel long ranges on a single charge. Manufacturers who achieve these mandates earn credits which reward them as opposed to penalize them if they don’t achieve these metrics. In July 2018, Tesla became the first automaker in China to be granted the right to fully-own its factory and operations without a Chinese partner.

The Chinese government announced plans in late 2019 to have 25% of all new vehicles in China be electric by 2025. In most cities, all new taxis and busses are electric. Shenzhen leads by example where 100% of cabs and 100% of buses are electric.

The other form of green-tech we’ll discuss in this blog is recycled fabrics.

China has a long history of waste recycling. Back during the planned economy era of the 1950s, the CPC created the State-run supply and marketing cooperatives (SMCs) with the purpose of controlling supplies and waste of towns and villages. The waste was split up between recyclable and non-recyclable. Due to widespread poverty, individual households would reliably sort the recyclable waste and sell it to the local SMC waste centers. With the rise of capitalism, this practice faded away for the most part and “scavengers” took up collecting recyclables from dumpsters to make extra cash. This is something still observable in all Chinese cities: people going through street bins for bottles and riding trolleys overloaded with scraps. 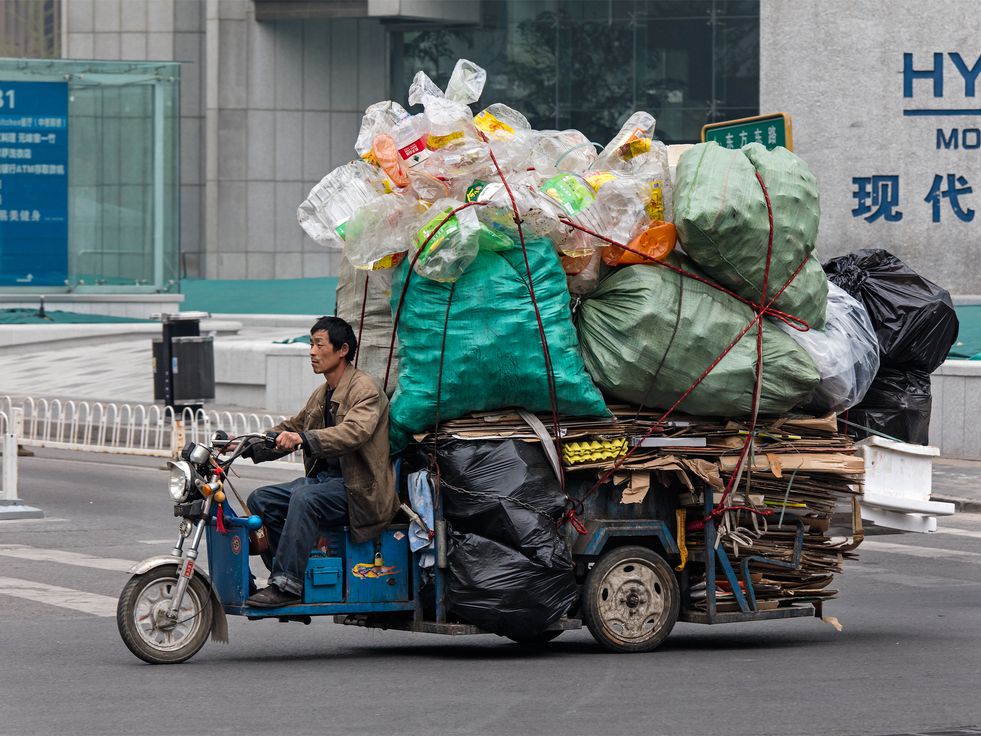 In July 2019, Shanghai was the first Chinese city to (re)introduce waste sorting and impose fines on individuals and companies for not properly sorting their waste. While the government never went after individuals for not actually sorting their waste properly, it did go after organizations. Overall and despite rumors of trash being combined by garbage trucks, recycling of waste in Shanghai is up 5 fold since the policy was implemented. This waste sorting will be applied to all prefecture-level cities in China by 2025. To further curb the growing plastic waste problem, since January 2021 China banned all single-use plastic bags and plastic straws. While these are still used by small stores, they have disappeared from supermarkets and large brands, and replaced with biodegradable alternatives.

The above mentioned incentives to EVs and initiative to recycle has had a behavioral effect on Chinese consumers to an arguable degree over the years, especially younger consumers. Today, EVs and sustainable clothing and products (AKA recycled fabrics) are more popular than ever to the growing upper middle and upper class.

EV sales in China have hit record sales targets nearly every month in 2021 due to the ramping up of high quality variations within the EV competition coupled with government incentives and development of charging stations across China. The $4200 Wuling EV minicar has proven extremely popular, outselling Tesla so far this year. Other popular new EVs include Nio & Xpeng with prices matching Tesla.

Recycled goods that were once looked down on now appeal to younger and affluent Chinese consumers who prefer eco-friendly initiatives and lifestyles. In T1 cities, multiple specialty stores have popped up in trendy areas and are effectively selling the sustainable lifestyle to a very influential demographic with strong buying powers, hipsters. These include re-furbished clothe and apparel made from plastic bottles and other discarded plastic scraps. Of the 100+ fashion brands that attended the last Shanghai Fashion Week, 40% were eco-conscious brands. 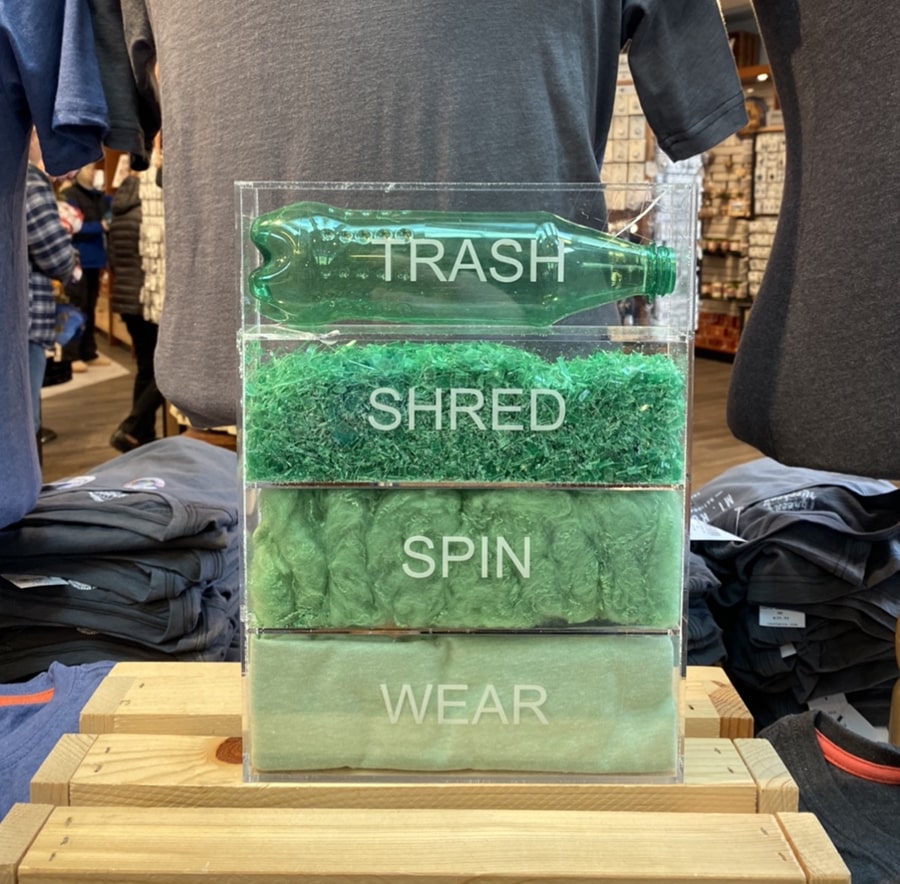 In 2019, the United Nations Environment Program (UNEP) reported that the clothing industry is responsible for 10% of global CO2 emissions, while fabric dyeing and treatment creates about 20% of global wastewater. These recycled fabric outlets are not merely selling a product, but rather a lifestyle and a mission to Chinese consumers. As Steve Jobs once said “Marketing is about values” and China is cruising in the perfect storm for greentech to thrive.