In bullet-points, this article will discuss: Taxation in China is administered by the State Administration of Taxation. This government body establishes the tax laws in China and sets the tax rates for all company types. The handling and collection of taxes, however, is dealt with at a local level by the local regional tax bureaus.

In general, most taxation schemes apply nationally but there are often cases where regional differences can arise. These can occur for several reasons, for example:

For many companies, the tax system in China can appear complex and confusing. One of the main reasons for this is that the rules and tax rates in China change frequently. This comes partly from a rapidly changing business environment (and a modern taxation system that only started in the 1980s), and partly from the government’s ongoing desire to improve the market for both domestic and foreign companies in China.

Tax faced by WFOEs in China

There are two main types of tax that apply to companies in China.

CIT is calculated on an accrual basis – that is income and expenses are recorded at the time they are earned/spent. It is calculated and paid monthly or quarterly (within 15 days of the period end), and then reconciled annually as part of a company’s year-end audit. Additional tax is paid or a rebate applied for as appropriate at this time.

CIT is calculated based on total income less allowable deductions. Deductions allowable for CIT generally include:

Tax incentives in China are a common method of encouraging investment in particular industries or regions, and these are often offered through CIT. There are currently several general CIT reductions in place, including:

Withholding Tax (WT) applies to payments of China derived income to non-resident enterprises. For such payments, a tax must be “withheld” before remittance. The current rate of withholding tax is 10%, but note that this is a general reduction from a higher rate of 20%, and could change in the future.

This would apply to the following:

Withholding tax is of importance when looking at Chinese profit repatriation. The most straightforward way to repatriate profit is to do so using dividends out of profits. This, however, means that CIT will have to pay on profits, then WT is paid on the dividends. This has several disadvantages:

It should be noted that China does not have a specific Capital Gains Tax policy. Any capital gains are treated as normal company income and therefore taxed as part of CIT.

Value Added Tax (VAT) is applied as a consumption tax, based on a percentage of the invoiced sale amount for goods and services in China.

VAT was first introduced in China in 1984. The system was notoriously complex, with many different rates and regional differences being applied, and a separate “Business Tax” soon being introduced for certain service sector sales. A major reform of the VAT system was carried out between 2012 and 2016, first applied only regionally but then expanded nationwide. From July 2017 the new VAT system in China covers all appropriate goods and service sectors, with three different levels of VAT – 6, 11 and 17 percent.

For most companies, VAT is calculated based on total applicable sales/invoices raised, as a specified percentage of sale amount – this is known as Output VAT. The total VAT payable is calculated by subtracting from this Input VAT. This is an allowance for VAT paid for purchases by the company.

Any company in China needs to register to pay VAT on its sales once its sale reaches a minimum level. It varies by region from approximately 5,000 to 20,000 RMB sales per month. This is particularly low and foreign companies will likely be used to much higher thresholds in their home countries.

There is an important distinction in China whether a company is registered as a general VAT payer or a small-scale payer. The criteria for this are based on annual taxable sales amounts, but there are often cases where a small-scale company may be better of registering as a general payer.

Note that for some companies it is beneficial to register for general status even with low income. Depending on the company finances, the ability to offset input VAT can be important, and to do business with some Chinese suppliers and clients it may be necessary to be able to issue VAT Fapiao.

There has been a significant change in the VAT system in China in recent years. In the past, there were a number of different rates applied for different areas, alongside a separate Business Tax applied for some areas of service income. These have gradually been simplified and merged, resulting in a new VAT system applied nationwide from July 2017 that has three different levels of VAT – 6, 11 and 17 percent.

These rates were altered again in May 2018 as part of ongoing efforts by the Chinese government to lessen overall tax burdens for companies. The 17% tier was lowered to 16% and the 11% tier lowered to 10%, with no change to the 6% tier. 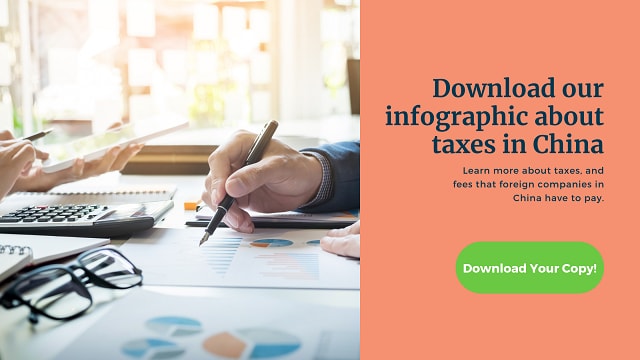 Which rate applies to which goods and services?

The following is a summary of the VAT rates applied. For a full listing consult a China accountant, or obtain the government-provided listings.

Consumption tax is another sales-based tax, this time applied to manufactured or imported consumables and luxury goods. It is based on the sale value of the item. Tax should be calculated and paid monthly.

Consumption tax rates vary from 1% to 56% depending on the item. The highest rates are applied to tobacco and alcohol.

Some examples of rates for some of the main product groups include:

In general, this tax is no longer applied in China but it is included here for completeness.

Business Tax was applicable for many years for various areas of service income (including financial, construction, leisure and entertainment) as well as various property and land use rights transactions. Business Tax was applied on a scale ranging from 3% to 20%, on gross turnover.

Following major VAT reform up to 2017, the areas where business tax was applied have now mostly been incorporated into the VAT system. There is a chance however that in some areas, WFOEs may still come across references to Business Tax.

Real Estate Tax is charged at a rate of 1.2% of the purchase price of a property. There is a discount of 10% to 30% offered on this by most local governments. Additionally, Real Estate Tax is eligible for deduction from CIT.

Future Changes to the taxation system

The taxation system in China has undergone many changes since the 1980s and will most likely continue to do so. The Chinese government remains supportive of improving the business environment in China, for both domestic and foreign companies. Simplification of the tax system and reduction of the overall tax burden for companies is a key part of this.

Some areas we think likely to see future changes include: