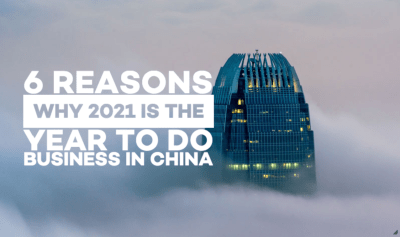 TLDR: China is the ideal place to start a business in 2021 because of a combination of favorable economic and political factors, an absence of social turbulences, an array of quality-of-doing-business technologies and applications, a large and returning bilingual and educated talent pool, and a global event causing an economic stop in much of the rest of the world.

Even though you will need to jump through a few hoops, you will find that China is among the most profitable and rapidly growing business environments on the globe.

If you want to find how and why to do business in China, read on. One of the key success factors of doing business in China is the incredible potential for development of the Chinese economy. The country’s economy is still growing at an unbelievable rate relative to it’s current size. It was expected China would overtake the USA in GDP after 2030, but covid19 has sped up this timeframe. Sources now estimate China will pass the USA between 2026 (high estimate) and 2028. (low estimate)

The opportunities in a developed country with such economic growth are tremendous given the physical and technological infrastructure present on the ground for companies to take advantage of. Just as the country began to open up its economy to foreign direct investment decades ago, today it is more open to international businesses than ever.

China’s consumer market is the fastest growing in the world. China’s retail annual growth rate is expected to grow at a 10% compound annual growth rate until 2025. In 2021, the average disposable income of Chinese families rose by 13% over last year, clearly demonstrating that although the overall GDP growth is waning, China’s consumer spending is seeing double digit growth in many retail industries. In the past 2 years alone, countless lesser known multinational brands have expanded and thrived in China: Shake Shack, 5 Guys, Harley Davidson, Cimpress and Cheesecake factory to name a few.

3. The abundance of high quality talent China is home to a lot of people to say the least, but it’s also home to a lot of very talented people. There are hundreds of thousands of educated (both locally educated and overseas educated) individuals in China. Many of them are bilingual and most of them are located in international business hubs such as Shanghai, Shenzhen, Beijing and many of the other cities we listed in our previous article: The Top 6 Cities to do Business in China in 2021. It is even possible to hire employees in China without an entity through the use of an Employer of Record. This is an effective way to begin business operations in China.

Due to Covid19, a large number of foreign educated Chinese nationals returned to China in 2020, further adding to the talent pool. Perhaps one of the best reasons to do business in China is for the exposure to Chinese technologies (notably applications) which China is pioneering on the world stage. Right now, in most Chinese cities, the sight of printed money or even a credit card is a rare sight to behold. Everyone pays for virtually everything using a simple WeChat or Alipay generated QR code on their phones. The universal rule of conversions is that the easier a process is, the higher the conversion rate and China has created the easiest way for it’s people to spend their money.

The key takeaway here is that businesses that succeed in China’s consumer market have the ability to take advantage of quality of life technologies and integrate with these mainstream apps to facilitate transactions and awareness of their brand to the masses of people that use them. This applies to offline and online sales and services. China is not without controversies, but the country’s politics has shaped it into a socially, politically, and economically stable country. Violent crimes are a rarity, protests are illegal. A one-party system isn’t perfect, but generally results in much less division among people. The absence of political turmoil, social outbreaks and economic downturns make it easy for businesses to predict their quarterly forecast and plan accordingly.

6. Covid19 recovery and the state of world economies

China is among the few countries that has fully recovered from the global pandemic. With plans to open up borders to select countries in 2021. All business activities in China have resumed and are flourishing again. Perhaps there is no better time to start a business or expand in China now that a large portion of the world is experiencing a temporary economic halt.

PrevPreviousThe Top 6 Best Cities In China For Setting Up a Business in 2021
NextFDI China Exclusive: The 21 Free Trade Zones Guide 2022Next

June 22, 2022 No Comments
Read More »
PrevPreviousThe Top 6 Best Cities In China For Setting Up a Business in 2021
NextFDI China Exclusive: The 21 Free Trade Zones Guide 2022Next